'Apple Pay' launches today: Should you use it?

If you have the latest iPhone or Apple Watch you can replace your plastic and make your device go BLEEP to pay at major retailers and on London transport. You can also use Apple Pay, which launched today in the UK, via some apps.

Below is a Q&A on who can use it (millions can't) and how safe it is, to help you make up your mind if it's for you. Also see our Cheap Mobiles guide to cut costs if you're thinking of getting a new handset – though getting a new iPhone isn't MoneySaving.

So what is Apple Pay?

It's essentially a digital wallet. You store card details on the device by loading them via the Passbook app or in your settings, then use the phone, watch or tablet to pay rather than the plastic itself.

The money comes out of the same account as if you used the physical card. It's handy if you've forgotten your card or just want the convenience of not taking it out. The first card you add will be your default card, but you can add back-ups.

In stores, hold the device over a contactless reader, while either putting your finger on the Touch ID sensor on your phone or double-clicking the side button on your watch – a vibration and beep lets you know it's worked. You can use it anywhere there's a contactless reader.

In apps, select 'Buy with Apple Pay' and place your finger on the Touch ID sensor to confirm the transaction.

What Apple devices does it work on?

It's up to stores. In some, such as Pret A Manger, there's no limit. Others are likely to apply the £20 limit on contactless cards when in a shop, which is due to rise to £30 from September.

Costa, M&S, the Post Office, and Waitrose, for example, have all confirmed there is currently a £20 limit, although M&S says it is considering introducing a limit above the £30 planned rise later this year.

When using an app, again it's up the retailer to set a limit, although there's likely to be less restriction. Minicab firm Addison Lee and booking site Lastminute.com, for example, have confirmed there are no transaction limits for Apple Pay app purchases.

Which bank cards will it work on?

Many shoppers have expressed annoyance today their provider isn't yet offering Apple Pay. As the table below shows, a number of giants aren't set up for it yet.

Apple Pay - which cards does it work on?

Can I use my Amex in all stores via Apple Pay?

If the retailer accepts American Express, then yes. If it doesn't, then no. Remember, it's like using the same card but via your phone or tablet.

How safe is Apple Pay? How are my details stored?

Assuming Apple keeps its promises and you keep your device safe, there aren't any obvious alarm bells. It appears less susceptible to fraud than using a contactless card as there's at least the added security of your fingerprint ID.

Though watch out if one of the finger print IDs registered is your child's as they may be able to use your device to buy stuff.

Apple stresses card numbers are never shared with retailers, plus all details are encrypted and "securely" stored in the 'Secure Element' – a chip in iPhones, iPads and Apple Watches. Apple says these numbers are not stored on its servers.

How do I stop fraudulent use if my device is lost or stolen?

How do I get my money back if it's used fraudulently?

Call you card provider, and report the problem. In virtually every case you should get your money back. It's no different to using a physical card, remember. Therefore, the same rules apply on fraud.

What are my rights if things go wrong?

They're similar to using a normal card.

You can use Apple Pay to make purchases in any stores where contactless is accepted, and on Transport for London (instead of an Oyster or contactless card).

How to best use Apple Pay on TfL

Always touch in and out using the same device, and ensure there's enough battery on your phone or watch. Otherwise you may be charged the maximum fare, which is up to £8.80 per journey.

If you make a mistake, try to get a refund from TfL at a station, by calling 0343 222 1234, or by applying online for a refund via your online account. You must do this within 28 days of the journey.

To get through the barriers quickly, TfL also advises you preauthorise the transaction in Passbook using your fingerprint, but do so within a minute of holding your phone to the reader. See the TfL website for more help.

I'm not an Apple customer. Can I make contactless payments?

If you don't have an Apple product, there are other ways to pay using contactless technology, such as:

As the image below shows, some users have really struggled to get it working with "apple" items. 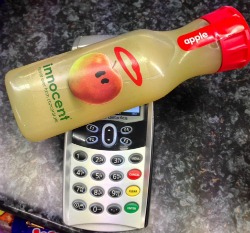 Apple Pay launches in the UK