Update 14 September 2021: We hope this story will give you inspiration, but note as the article is now five years old, the switching deals mentioned below have gone – for the latest deals, see our Best Bank Accounts guide instead.

MoneySavers who've racked up £100s by repeatedly switching banks have battled it out for the title of Britain's biggest bank tart – with one couple sharing a whopping £1,565 and another switcher making £845 in the first three months of 2016 alone.

Earlier this year we asked if you could beat the £791 in free cash and vouchers amassed by energy efficiency adviser Stephen McNulty, who switched current accounts six times in just over two years (see the Is this Britain's biggest bank tart? MSE News story).

As his story showed, it's possible to make £100s from 'tarting', or switching bank accounts – and while there's a limit on how much you can make, as only a certain number of bank accounts offer switching incentives, the response we had from MoneySavers shows he's far from alone.

See our Best Bank Accounts guide for our current top picks – in this article we explain how to do it, plus what to watch out for and the possible impact on your credit file.

How Britain's biggest bank switchers did it

When we set the bank tart challenge back in March, lots of MoneySavers stepped up and shared their switching success stories. Most impressive was Simon Bartram and his wife, who told us they'd made a cool £1,565 between them.

Simon, who said he was working part-time at Tesco.com, said: "It all started back in 2012 – my wife and I, inspired by Mr Martin Lewis, started switching our accounts. Keeping track of the £1,000 float going in and out of some of the accounts to qualify for the deals takes some doing, but was well worth it in the end."

Meanwhile, Christopher Owen from Putney in London told us he'd only started switching in January this year – but by the time he'd contacted us in March he'd already made £595 and had another £250 on the way from switches in progress.

He said: "I only found your website in November last year and have adopted so much. Instead of moving one account around to various other banks, I have opened many accounts with banks that don't offer switch incentives and switched to the ones that do." Christopher said he'd also made £300 from referring three friends to open a Nationwide account.

We've listed some of the biggest successes below. To compile the table, we looked at two measures – the amount made from banks' introductory switching bribes between March 2014 and March 2016, and then the total amount over a longer time period and including additional cashback. Where a couple both switched accounts we've combined their earnings.

What the top bank switchers made (cash & vouchers) 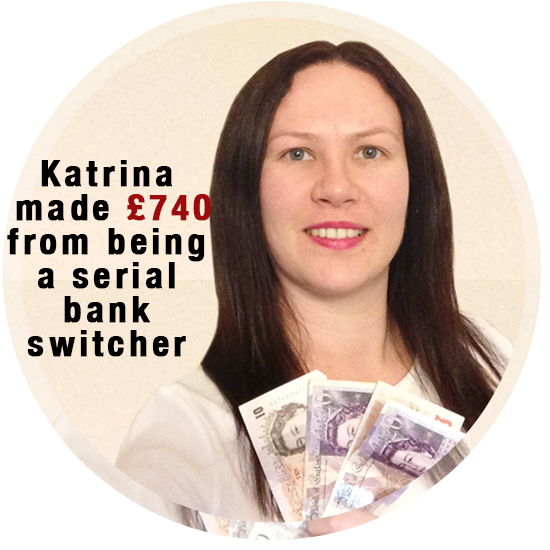 If you think you've mastered the art of the old switcheroo and can blow the totals listed above out of the water, please get in touch to share your success by emailing us at news@moneysavingexpert.com.

How can you do it?

Bank switching incentives change regularly, and some of the deals the MoneySavers who got in touch in March took advantage of are no longer around. Right now, the big banks are offering switchers a total of £450 in cash or vouchers:

See Best Bank Accounts for full details plus info on each account. Switching bonuses come and go though, so make sure you're signed up to our weekly email to see when banks offer new bonuses or up their incentives.

Here are the key need-to-knows:

Is there a limit on the number of times you can switch bank accounts?

Each current account has its own separate rules, so you need to check the terms and conditions. However, as long as you abide by these, regulator the Financial Conduct Authority says there's no limit to how often you can switch accounts.

Try to pick bank accounts to switch to when they're paying the max, though, because you may have to wait years to do it again, if you can at all. Here are the restrictions the current top payers place on their switching bonuses:

It's also worth bearing in mind that with some of the best deals you don't get the switching incentive cash immediately – in some cases you have to wait up to 45 days.

What about the impact on your credit file?

Switching bank accounts leaves a mark on your credit file, and only having short-term bank accounts can have a negative impact. Our switchers have generally been able to get the free cash without it having a particularly negative effect.

But if you plan to try to get accepted for a mortgage or a big credit application, stop switching a good year in advance to give your credit score time to recover (applications only stay on your credit file for a year).

See our Credit Scores guide for more info on managing and boosting your credit rating.

Which was the best switch?

Our top 10 switchers had mixed views on this, but three were big fans of Halifax, mainly for the speed with which the bonus is paid (you'll get the bonus within three working days once your switch has completed).

Sarah Marshall gave her view: "I'd say Halifax win. I get more from the £5 reward than my salary would ever get in interest and they also promise your reward in a lightning three days – and were as good as their word."