TSB has apologised after it opened a new current account and sent a debit card to a man who passed away in 2017, in a new blunder which has emerged just days after the bank admitted it had wrongly told companies some of its ex-customers had died.

In mid-May, several weeks after the start of TSB's IT meltdown, MoneySaver Lynda Warren received two letters addressed to her late father Peter, one containing a new debit card and the other a PIN.

Peter, who had only ever had a savings account with TSB, passed away in November 2017, and Lynda says TSB were informed of this by the executors of his will.

Lynda told us she was "at a loss" to understand TSB's error, which she described as "the reverse" of a mistake MoneySavingExpert revealed two weeks ago which resulted in the bank cancelling some former customers' direct debits and incorrectly telling the firms they were paying that they had died.

TSB has apologised for any "distress and inconvenience" caused by its latest error, and after we contacted it about the issue, a TSB staff member rang Lynda to explain what had happened. She says she's also been offered £100 in compensation.

If you've been affected by TSB's IT meltdown, see our TSB online banking problems guide for full help.

How did TSB get it wrong?

A TSB spokesperson told us: “We’re really sorry to hear what has happened to Ms Warren. We made an error when closing her father’s account last year, and we’d like to apologise for any distress and inconvenience this may have caused.

"We have contacted Ms Warren to put this right.”

When Peter's TSB savings account was closed after his death, TSB made a mistake in not applying the interest he had accumulated.

This was noticed by the person processing the account closure, but TSB could not reopen the account as it was a fixed-term savings account. So another account was opened to allow the bank to pay the debit interest owed.

When a current account is opened for a customer, a debit card and PIN is usually sent out to the customer, and TSB accidentally didn't cancel this - so the card was sent out.

One of the letters Lynda received on behalf of her father dated 11 May can be seen below: 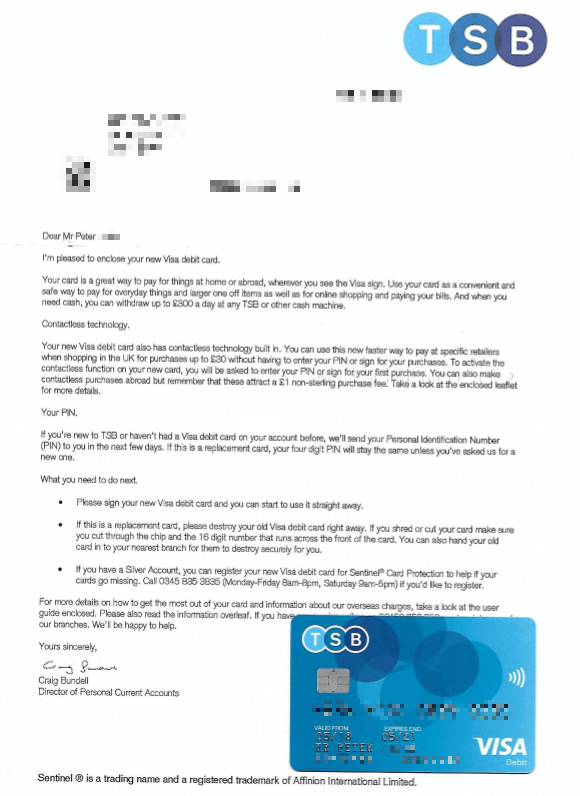 'It is extraordinarily careless'

When Lynda first contacted us about the issue, she told us: "I have been prompted to let you know after seeing the story where customers are having their direct debit mandates cancelled with the reason 'customer deceased'. My problem is the reverse, where they are treating my late father as if he is still with us.

"Apart from the distress of receiving post of this nature for my late father, I am also at a loss to understand how TSB can have opened a current account for my father and issued a debit card – surely there should be internal checks before accounts are opened and cards sent?"

After we contacted TSB and it offered her compensation and an explanation, Lynda added: "It is extraordinarily careless that there was not a checking process in place or followed to... suppress the issue of cards."

She thanked MSE for intervening and said she was "overall satisfied" with the outcome.