Santander worst for bank service (again) but RBS close behind

Santander has seen a big improvement in customer satisfaction but that hasn't stopped it maintaining the unwanted ignominy of being the worst of the major banks for customer service, in a poll of MoneySavingExpert.com users.

But the Spanish giant was pushed all the way in the wooden spoon race by the troubled RBS group.

Meanwhile, First Direct was once again top dog as the best bank for service, while the Co-op and Nationwide continue to score well.

Despite finishing bottom, Santander's service has improved dramatically according to our twice-yearly poll as it is now bottom of the pack of major banks, rather than the lone outlier it once was.

When we first ran a customer service survey in August 2010, a mammoth 62% of its customers rated Santander's service as poor. Since then, this figure has dropped in each of our polls and it now stands at 26%.

In contrast, perceived service levels at the RBS Group (which includes NatWest, RBS and Ulster Bank) have unsurprisingly slumped after the bank's IT meltdown this summer which saw millions unable to carry out basic banking functions for weeks.

Some 24% of its customers who voted rated service as poor, up from 18% six months ago. In that time, RBS has moved from 4th bottom to 2nd bottom.

To make matters worse, when the RBS brands are split out, its Ulster Bank subsidiary was actually bottom overall (61% poor) but we included its results within the RBS Group when determining ranking as, on its own, it is not one of the major UK-wide banks.

Some Ulster Bank customers went a month without being able to make payments or see deposits that had been paid into their account following the RBS meltdown.

In the poll, we asked users to rate their bank or building society's service over the past six months as either 'poor', 'OK' or 'great'. Here's how they voted.

The graphs below also show how banks' service ratings have changed since we first started running our polls two years ago, again separating the good and bad. 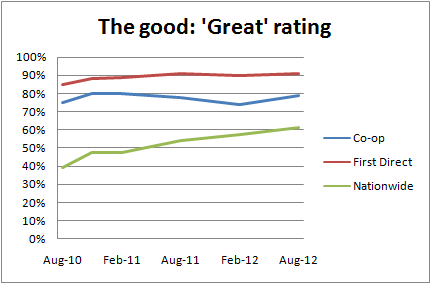 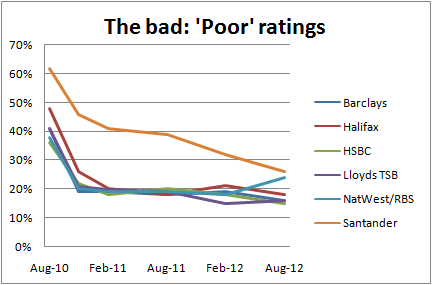 An RBS spokeswoman says: "Our chief executive Stephen Hester said what happened was unacceptable and we are working hard to regain people's trust."

John Wren, Santander director of customer experience, says: "We are encouraged to see the improvement we've made to customer service.

"We know from what our customers tell us about their experience and our own monthly surveys that nine out of 10 Santander customers are satisfied with the service they receive.

"We do have more to do and continue to focus relentlessly on improving the levels of service."