HSBC, Lloyds Banking Group and RBS are the latest firms found to have used dubious 'legal' tactics to pressurise indebted customers into paying. MoneySavingExpert.com has received copies of a number of misleading letters from the banking giants.

They hit our inbox after we asked you to email us any copies of letters from fake lawyers chasing debts – whether for energy firms, banks or payday lenders – after claims it may not just have been Wonga that used these sneaky tactics. (See the MSE News story: Is it just Wonga? Send us your debt demands from fake lawyers.)


Andrew Tyrie MP and chairman of the Treasury Committee, today says he will write to the banks involved following allegations made in other news publications as "customers should know who they are dealing with – it seems they may not have done".

There is no suggestion that this tactic is illegal, but we think it's misleading.

It comes as over 300,000 graduates were sent fake 'debt collection firm' letters by the Student Loans Company.

Here are examples of letters from HSBC and Lloyds: (click to open): 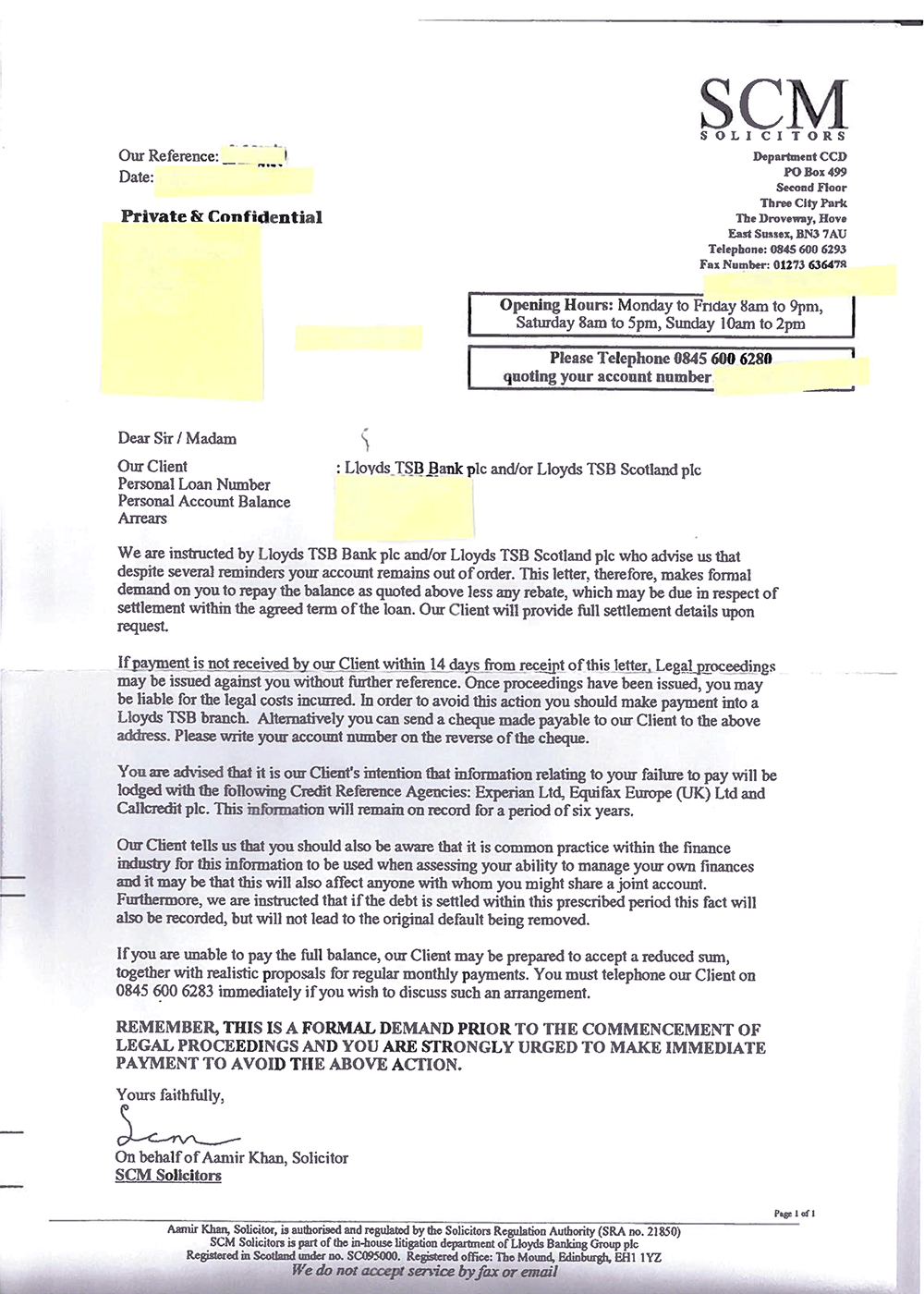 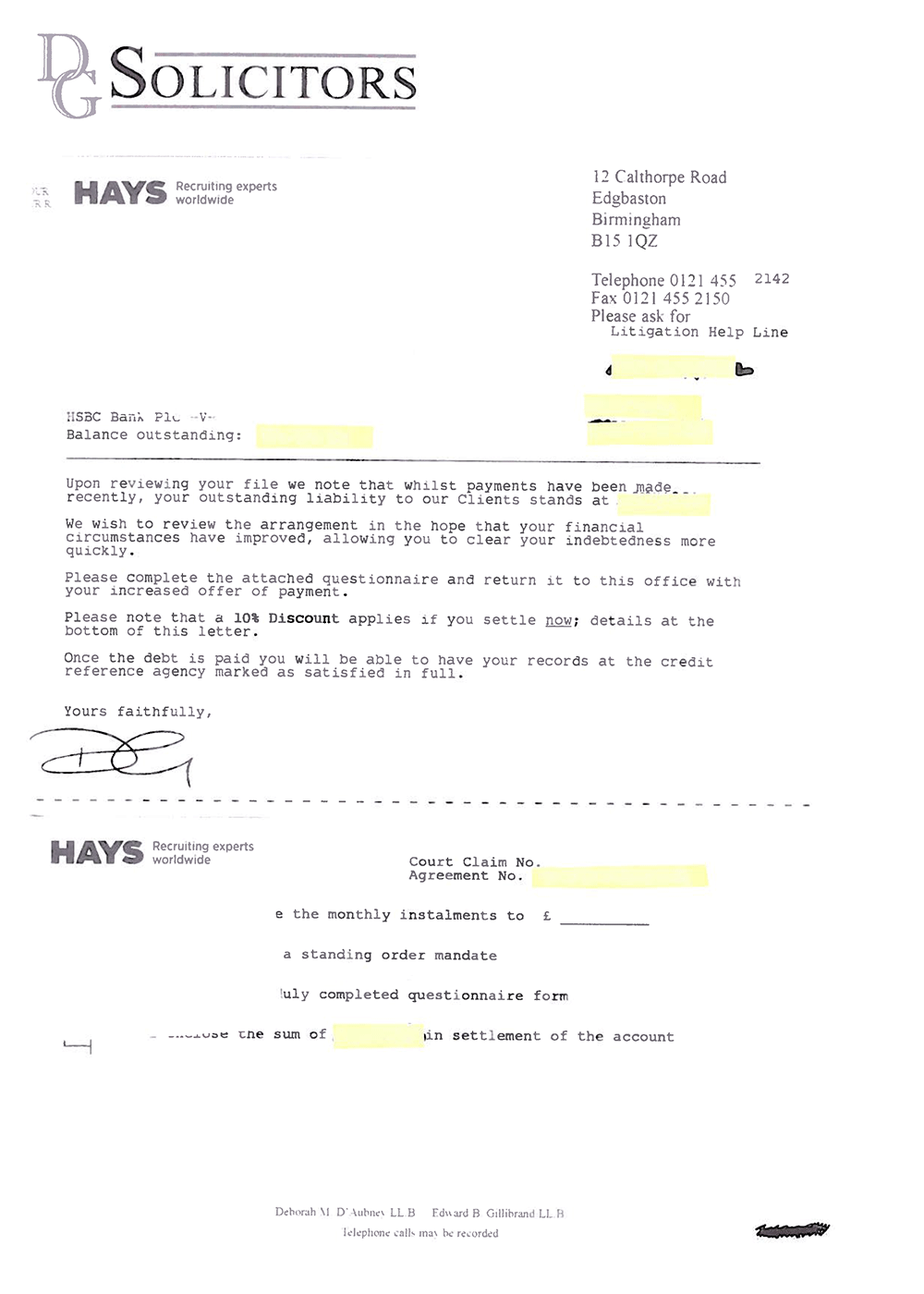 Guy Anker, MoneySavingExpert.com managing editor, says: "Banks have been kings of deceiving customers over the years, just witness the mass mis-selling of PPI. And this is yet another devious way to manipulate loyal and unsuspecting customers, in this case those most vulnerable who are in financial difficulty.

"Thankfully HSBC, Lloyds and RBS have either stopped or plan to stop using this deceptive tactic, but it doesn't excuse their shameful behaviour."

HSBC: "All customer letters from DG Solicitors were compliant with the Office of Fair Trading debt recovery rules and made it clear that it was HSBC's in-house firm of solicitors and that its people were HSBC employees. HSBC stopped using its legal firm DG Solicitors in January 2014 and legal correspondence to these customers is now under the HSBC brand."

Lloyds Banking Group: "We continue to simplify our business to ensure that we support our customers in the most simple, straightforward and transparent ways possible.

"As part of the simplification of our collections and recoveries operation from earlier this year we made the decision to phase out the use of SCM."

RBS: "Our customers should never be in any doubt about who they are communicating with. We have reviewed our policies in this area and will stop the use of any solicitor or debt collection brand names in correspondence with our customers that could cause confusion."

How do I check if a solicitor/law firm is legitimate?

First, Google the name and address on the letter and see if you come up with any matches on the internet. If you don't, it could be an indicator the firm is fake. If you're suspicious you should take the following action to check if the firm is legitimate:


What should I do if a law firm is fake?

If you've carried out the relevant checks, and you are sure the firm or individual solicitor isn't registered, you should do the following:


Should I respond to demands for money?

Whether you receive a letter from a real or fake law firm, it doesn't affect the fact you're still liable for any debts you owe. If you're struggling to repay, speak to a free debt advice agency for help in coming an arrangement with your lender.

See our Debt Problems guide for a list of agencies and how to get help.

If you believe you've had a letter from a fake lawyer or law firm, or from a fake debt recovery firm, first check to see if it's legitimate – see our Send us your debt demands from fake lawyers MSE News story for how to do this.

If you think it's suspicious, please email us a copy so we can gather the evidence and compile a dossier of letters from fake law firms. You can scan the letters or emails you've had, or take a photo of them with your mobile phone, and send them to: