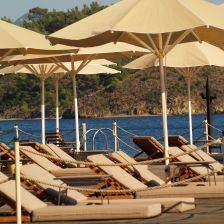 Nationwide wants to close the door on its popular current account to holidaymakers who only apply for its cheap overseas spending perk.

However, there's a loophole to beat the clampdown so you can open what is the top current account for spending abroad. Unlike other providers, there's no foreign commission charge when using its debit card in many countries.

The UK’s largest building society now says you can only normally apply for its FlexAccount if you make it your main current account. That means you will have to agree to pay in your salary or pension.

Until last week, anyone qualified, subject to meeting the provider's credit criteria.

Yet you can also apply if you’re a Nationwide mortgage customer, or if you’re 16-21 and transferring from its Smart account. Alternatively, if you’ve more than £2,000 in savings with the society, or if you’re opening one of its online savings accounts.

So simply open its e-Savings or e-Savings Plus account, at the same time as the Flexaccount, and deposit just £1 to qualify.

There's no change for existing FlexAccount holders who'll get the cheap overseas perk, even if it's not their primary account.

A Nationwide spokeswoman says: “We want to build relationships with customers and we want to encourage them to use this as their main account."

The FlexAccount is the only standard current account that charges no transaction fee in a European country. There is also no cash withdrawal charge worldwide.

It currently charges 0.84% in most non-European countries (rising to 1% on 1 July), a charge which came into effect this week. Yet this is much lower than its rivals, many of which levy commission up to 3% worldwide, adding £30 to a £1,000 spend.

Some other current account providers also add a separate purchase fee abroad, Halifax being worst-offender at £1.50 per transaction. All other providers add a cashpoint fee of up to 3% of the amount withdrawn.

If you’re holidaying outside Europe then there are two credit cards, the Abbey Zero and Post Office plastic, that charge no commission worldwide.

Abbey Zero is our top pick because, unlike the Post Office card, it charges no cash withdrawal fee if you need emergency currency. However, it’s always wise to avoid using a credit card at an ATM as the interest charged is high.