MSE leaders' debate: What will Gordon Brown do for your wallet?

Update 23 February 2021: This is an old story focused on the 2010 election campaign. For the most recent election pledges, see our Election 2019 MoneySavingExpert.com Leaders' Debate homepage. The Conservative's Boris Johnson won this battle to become Prime Minister in July 2019. 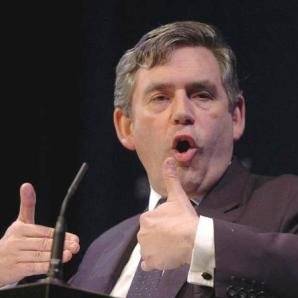 Want to know what Gordon Brown would do for your wallet if he is re-elected as Prime Minister?

Of course, politicians are experts at avoiding questions, so make up your own mind on Labour leader Brown's (pictured, right) policies from his full answers below (with our questions in bold).

See the MSE leaders' debate guide for edited versions of the Conservatives', the Lib Dems', Plaid Cymru's and the SNP's responses.

MSE question: While the oil companies and retailers take a cut, 70% of the cost of petrol is made up of tax – so people are really paying the Government. Many consumers feel the price is crippling yet environmentally others argue it will be high.

Gordon Brown's answer: "The recent rises in imported oil prices have driven up petrol prices.  That's why we decided in the Budget not to press ahead with the full planned rise in fuel duty and, instead, to stagger it over a longer period.

"What we have to do is balance the environmental effects and the impact on people's finances with the revenue raised. So we've made sure fuel duty has not risen as fast as inflation over the last decade."

Gordon Brown's answer: "We will make the energy market more competitive and better for consumers by opening it up to new suppliers and increasing downward pressure on prices.

"We will legislate for a new statutory code of energy consumer rights so that everyone gets a clear and transparent bill, with information on every bill about the cheapest available tariffs. The code will also give the Ombudsman the power to force suppliers which break the rules to give compensation to consumers.

"We will use our new Energy Act to bring in more discounted tariffs for vulnerable customers, including around one million pensioner households who will have at least £100 off their annual energy bill.

"And the Post Office will help anyone to take advantage of cheaper direct debit tariffs with their new budgeting account.

"We will make the energy companies help fund insulation, so that all lofts and cavity walls are insulated by 2015. By 2020 every home will also have a smart meter to help control energy use and enable cheaper tariffs.

"For people living in rented housing we will regulate landlords so that accommodation is properly insulated. And we will legislate to bring in ‘Pay As You Save' financing schemes so that you can pay for home energy improvements from the savings you generate on energy bills."

Gordon Brown's answer: "We have raised the annual limit for Isas to £10,200 and we are committed to raising the limit in line with inflation. We will also make it easier to switch ISAs by bringing in single, transferable account numbers.

"For pensioners, the amount of savings they can have and still get the Pension Credit will be increased from £6,000 to £10,000.

"Our new Savings Gateway account for people on lower incomes will be available to over eight million families from this July. This gives savers an extra 50p for each £1 they save, up to a limit of £300. To encourage savings among young adults, we will also offer a matched savings account for basic-rate taxpayers aged 18-30.

Gordon Brown's answer: "The regulator has said that bank charges have halved on average since 2007. But we think the banks must move further and faster to treat consumers more fairly. So we will legislate to impose fair charges if progress on this is not good enough.

"If re-elected we will bring back – as quickly as possible – our legislation to give consumers a right to take collective legal action against the banks. The Conservatives blocked this in the last week of Parliament in April.

"And we will make it easier for everyone to switch their accounts to take advantage of better deals. We'll do this by bringing in portable account numbers for everyone, which will be transferable like your mobile phone number, to take the hassle out of switching."

Gordon Brown's answer: "We will do all we can to keep interest rates low. We have put special arrangements in place to keep mortgages flowing and we have introduced new support for first time buyers during the recession, as well as a wide range of extra help for anyone struggling to keep up with their payments."

Gordon Brown's answer: "Our HomeBuy Direct is a really popular scheme which the Lib Dems would scale back – we will keep it. This has already helped 10,000 first time buyers.

"It provides equity loans to help people who can afford a mortgage but struggle to find the levels of deposit needed to buy their home."

Gordon Brown's answer: "We have imposed new rules on credit card companies to end the sharp practices which sting so many credit card holders. When we did this we took into account the views of MoneySavingExpert.

"For example, they must change how your repayments are allocated to your credit card debt so the most expensive part of the debt is paid off first. This will help put hundreds of millions of pounds a year back into your pockets and purses.

"We will also give you a statutory right to reject interest rate increases, so that you can keep paying off your old debt at the old rate.

"And we will ban companies from hiking up the interest rates they charge you - or increasing your credit limit without being asked - if you are struggling to make ends meet. We have already banned credit card cheques."

Gordon Brown's answer: "We want an all-party commission to come up with proposals on council funding, including on updating the Council Tax bands.

"We will also review the role of Ofwat, the water regulator, to ensure customers are getting a fair deal and their voice is heard when prices are being set."

Gordon Brown's answer: "This was a plan that Labour announced with Martin earlier this year, and we are 100% committed to bringing back the legislation to make financial education compulsory – legislation that the Conservatives blocked – as quickly as possible if we are re-elected."

Gordon Brown's answer: "We have abolished stamp duty for first time buyers buying homes under £250,000 for two years. This will lift 90% of first-time buyers out of paying stamp duty."

Discuss this MSE news story: MSE leaders' debate: What will Gordon Brown do for your wallet?