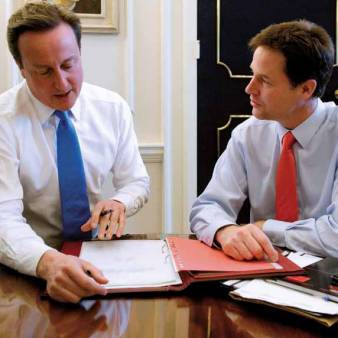 The new government says it will introduce measures to end unfair bank charges and limit many credit card stealth charges.

The Conservative / Liberal Democrat coalition made the pledge in its final 'programme for government' agreement, which also includes the promise of a freeze in council tax and the reform of energy bills.

These are in addition to plans announced last week in the 'coalition negotiation agreement' to cut income tax, hike capital gains tax and reform the pension system (see the Massive changes to your wallet MSE News story for full details).

However, with an emergency Budget due on 22 June, many plans still lack full details, while there is still no news on a possible hike in VAT and other devils laying in the detail.

What they say: "We will introduce stronger consumer protections, including measures to end unfair bank and financial transaction charges."

What it means: Banks and building societies will have to lower their charges for exceeding your overdraft. The crackdown is also likely to apply to other fees, such as for transferring money or paying for an item or service on plastic (such as a flight).

However, it is not clear exactly what the government defines as "financial transaction charges".

On bank charges, many consumers are, and have been, stung by fees of up to £39 a time, while some banks levy charges-on-charges which deepens the debt misery for those in hardship.

However, there was no mention of help for those already hit by excessive bank charges even though deputy prime minister Nick Clegg said before the election he wanted current account providers to return unfair fees already levied, despite banks winning the historic test case last year.

Dan Plant, MoneySavingExpert.com money analyst, says: "While this is a positive step, it does not help the millions already hit with rip-off fees.

"Reclaiming, however, is not dead for those in hardship."

What they say: "We will give regulators new powers to define and ban excessive interest rates on credit and store cards; and we will introduce a seven-day cooling-off period for store cards.

"We will oblige credit card companies to provide better information to customers in an electronic format that allows consumers to find whether they are receiving the best deal."

What it means: This could end the practice of lenders hiking your interest rate, known as rate-jacking, which often hits those already behind on payments or close to their limit.

It is possible to reject hikes now (see the Reject rate-jacking guide).

The plans also mean consumers will have time to consider whether they really want the store card they've just taken out. Store card interest rates are usually hideous (see the Store Cards guide).

Consumers may also be given more information comparing the plastic they have with others on the market, though this detail is still sketchy.

The plans partially overlap moves by the previous government in March to ensure lenders must: use repayments to clear your most expensive debt first so it's not trapped accruing interest, curb credit limit increases and limit rate hikes (see the Credit Card Crackdown MSE News story).

What they say: "We will freeze council tax in England for at least one year, and seek to freeze it for a further year, in partnership with local authorities."

What it means: It does what it says on the tin. However, many are paying too much council tax and could reduce their bill and get a rebate if they've been placed in too high a band (see the Council Tax Rebanding guide).

What they say: "We will increase households' control over their energy costs by ensuring energy bills provide information on how to move to the cheapest tariff offered by their supplier, and how each household's energy usage compares to similar households."

What it means: If seen through, households will be told how to switch tariff. Those on their energy firm's standard tariff are paying, on average, £300 a year too much and many should swithc provider altogether (see the Cheap Gas & Electricity guide).

Energy bills are also notoriously complicated. Research today from Energyhelpline.com reveals 69% are confused by gas and electricity bills while 60% think they are deliberately made complicated to mask high prices.

What they say: "We will reform energy markets to deliver security of supply and investment in low carbon energy, and ensure fair competition including a review of the role of Ofgem."

What it means: Ofgem, the energy regulator, has received criticism for lacking teeth by failing to bring the major energy suppliers to book, particularly around pricing.

Last year, Ofgem wrote to the big six energy firms asking them to reduce prices given the wholesale cost of gas and electricity was falling, but this largely fell on deaf ears.

What they say: "We are committed to fair pricing for rail travel."

What it means: This doesn't say a lot but passengers have long complained about unfair pricing.

Only this month, it was revealed some train firms are redefining 'peak hours' to trap more commuters into paying higher prices. As things stand, only some fares are regulated (such as season tickets) meaning they rise or fall in line with inflation.

"If necessary, we will consider using the part of the TV licence fee that is supporting the digital switchover to fund broadband in areas that the market alone will not reach."

What it means: Many parts of the country cannot receive high-speed broadband because suppliers, such as BT, have not installed the relevant technology.

The previous government had planned to fund the UK-wide roll-out with a 50p per month broadband tax but this was scrapped ahead of the election.

Instead, the new government made no mention of a tax to pay for this, instead stating it will use part of the licence fee, though it remains to be seen if that will lead to a higher licence fee (see the Cheap Broadband guide).